And we thought the Liberals had soul searching to do… 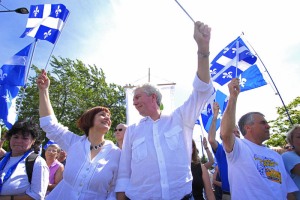 Duceppe at a St. Jean Baptiste Day celebration in 2007

And, to be fair, the Liberal Party of Canada certainly does. That the Bloc Quebecois is in an equally unenviable position – maybe even more unenviable, if that’s possible – does not take away from the steep uphill climb ahead of the Liberal Party and their growing membership base.

But even the Liberal collapse is nothing compared to the shellacking that Gilles Duceppe and the Bloc Quebecois took last Monday. And the real soul searching has already begun for a party that not only has to find a new leader and a new purpose, but undergo the existential process of questioning their very reason for being. And hell – even the Liberals don’t have to do that because at least they have retained official party status. The Bloc are eight seats shy of that mark, although Gilles hopes his successor will challenge this based on Parliament’s partial recognition of Quebec as a ‘nation.’

Some former Bloc MP’s are arguing that the party “should be [in] no hurry to launch a leadership race, and that questions on the party’s raison d’être need to be answered first.” Others have already announced their interest in Duceppe’s old job, mere days after he held his last official press conference, and before his office and Ottawa apartment have even been cleaned out. One such contender is arguing his case that “our members need to be reassured that there will be some continuity and that there are those who are willing to work at it.”

But, as others have lamented, the cadaver – that is, Gilles Duceppe – isn’t even cold in the ground yet.

Any way you slice it, the Bloc’s road back to relevancy is perhaps even longer than the Liberals. For them and their supporters, the question is not just how to find their way back, but whether they should even bother. The 1995 referendum was a long time ago – the 1980 referendum even longer. Canada – and Quebec’s place within Canada – has changed significantly since then, and perhaps the country no longer needs a federal party arguing for the rights of Quebec, if we ever needed one in the first place.

For Bloc MP Daniel Paillé, the issue is broader than one election’s results. He writes that “we can’t pretend that the question about the relevance of a sovereigntist party in Ottawa hasn’t been asked. Has the Bloc done its time? Twenty years is a long time,” Mr. Paillé said in an open letter in La Presse newspaper on Wednesday.

Editor-in-chief at Alternatives Journal. Author of 'Overrun: Dispatches from the Asian carp Crisis'.
View all posts by awreeves »
« Globe and Mail ponders the ‘decline’ of the Green Party
George Monbiot on Environmentalism and correcting Wente’s ignorance »